But not if it requires premature sprawl development on farmland.

Add your name to say no to sprawl.

Update on 19 Apr: planning committee voted 4-1 to approve the sprawl. Voting in favour of the sprawl were Josh Morgan (as Acting Mayor), Shawn Lewis (Ward 2), Steve Lehman (Ward 8) and Steve Hillier (Ward 14). Voting against was Anna Hopkins (Ward 9). Stephen Turner (Ward 11) spoke against the proposed development but had to leave the meeting before the vote. The next step is a debate at the council meeting on 3 May. However, Steve Hillier was one of the six councillors who voted against directing civic administration to bring forward this bylaw; if he has changed his position, as it seems he has from his vote at planning committee, the council meeting may be a formality. Mariam Hamou (Ward 6) and John Fyfe-Millar (Ward 13) were appointed to council after council directed staff to bring forward this bylaw, so the council meeting on 3 May will be the first time they weigh in on this issue.

Update on 18 Apr: Tomorrow (19 Apr), starting no earlier than 4:45pm, planning and environment committee will hold a public participation meeting on the proposal to amend the official plan to change the designation of these lands from open space to low-density residential. You can register for the PPM by emailing [email protected]

The staff report, which is responding to the 7-6 vote to direct civic administration to bring forward this bylaw to amend the official plan, is available here.

On Monday, planning and environment committee will consider a proposal from Deputy Mayor Josh Morgan to ignore planning staff's recommendation to refuse a request from Auburn Development to change an open space designation to a low-density residential designation.

The proposal was described as an "innovative land deal" by CTV London. If it is approved, it certainly would be an example of "let's make a deal" planning.

The first part of the deal is a good idea. It involves changing the zoning in an area South of Sunningdale Rd to allow for a new school. So instead of more low-density homes, which the area already has a lot of, a school could be built. Because it is in an area that is already serviced, construction of the school could happen more quickly than waiting for another school block in a new subdivision to become available. Funding for a new school in the Northwest has already been approved by the province.

[updated on 27 Sep] Although TVDSB staff write that the New Northwest PS would help to alleviate the significant over-enrolment issues at Sir Arthur Currie Public School, the approved funding for the New Northwest School is to alleviate the pressure on the students who are currently in a holding zone to X PS [formerly Ryerson] (see page 18 of the TVDSB June 2020 accommodation plan (excerpt below)). A permanent solution for enrolment pressure at Sir Arthur Currie PS is identified as a priority to be re-submitted to the province in the future. My understanding of that is that two new schools in the Northwest are needed, not just one, and that the one new school that is funded now may not address both the holding zone students and the over-enrollment at Sir Arthur Currie PS. 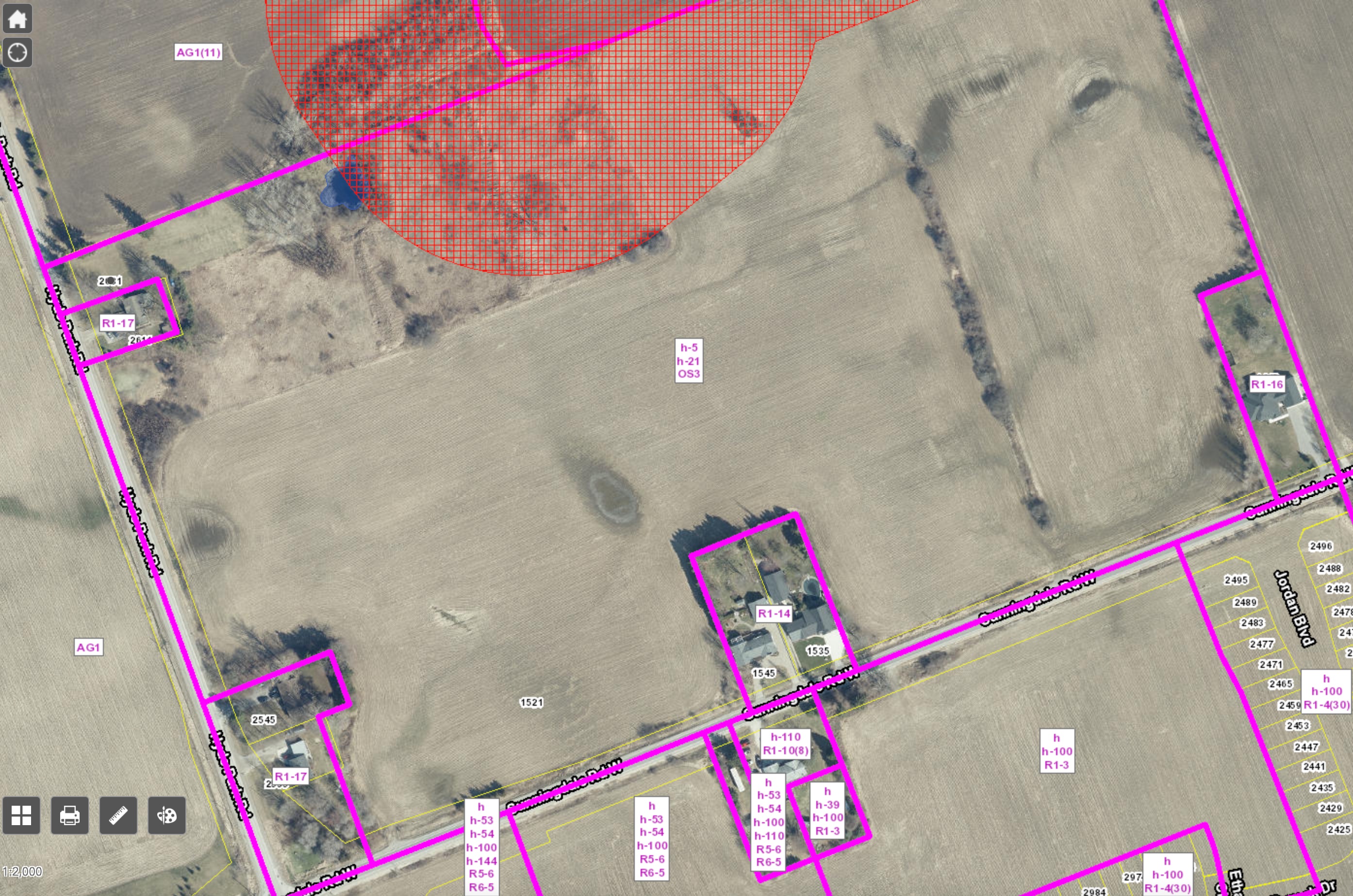 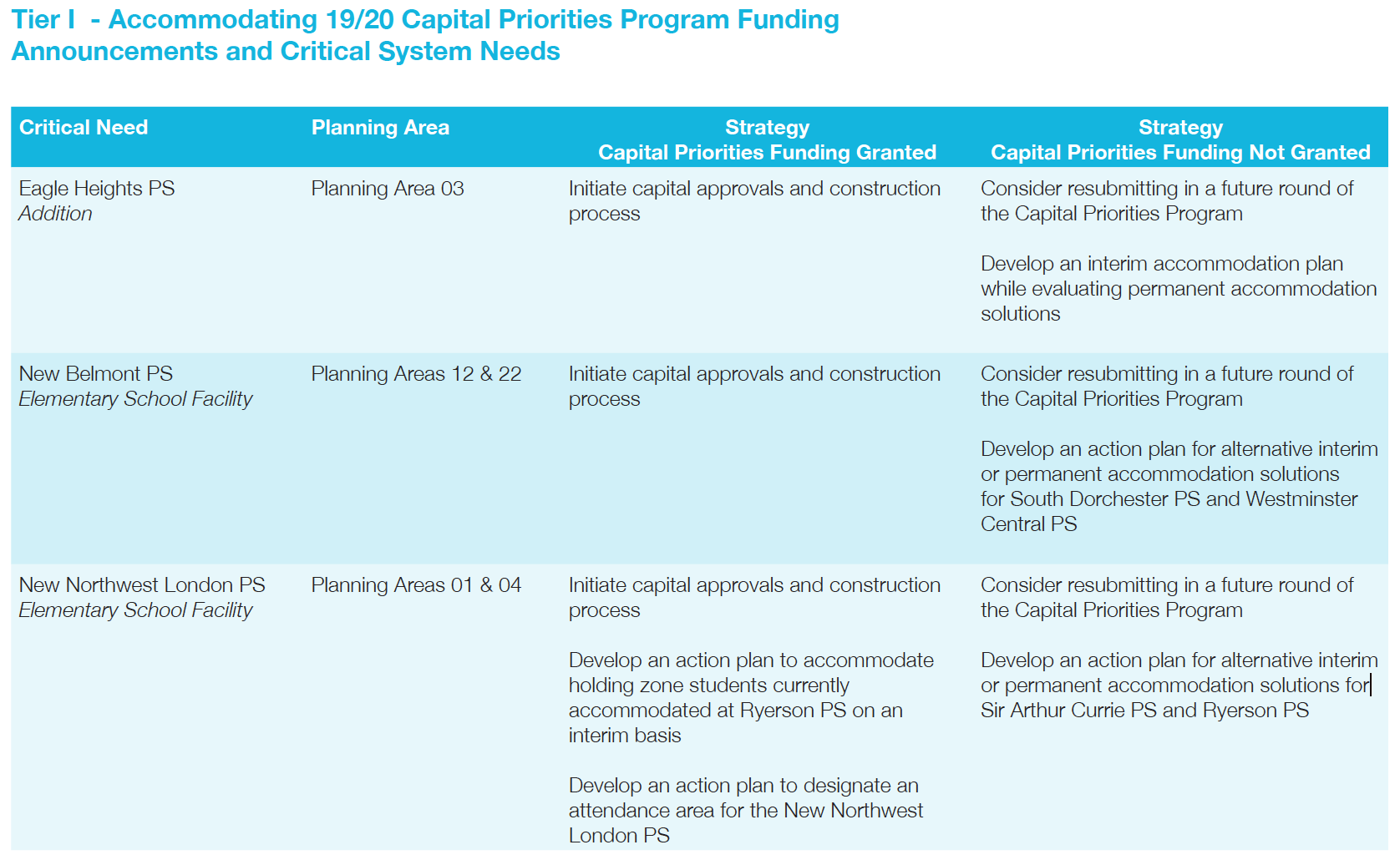 It's the second part of the deal that's a problem. It means ignoring the planning staff recommendation made earlier this year to refuse Auburn's application to change the official plan designation for its lands North of Sunningdale from Open Space to Low Density Residential. These lands are just inside the urban growth boundary but the adjacent lands to the West, North and East are outside of the urban growth boundary. The lands are currently agricultural.

Making matters worse, there's no comprehensive plan for the overall area North of Sunningdale or a servicing plan that will ensure that the lands can be serviced in a cost-effective way. Auburn has proposed temporary servicing, constructed at their cost, but it's the city and property taxpayers that are on the hook for the long-term costs of the servicing.

It's sprawl. And it comes with all the downsides of sprawl.

Auburn selling some of their lands South of Sunningdale to the school board looks like a good way to accelerate the construction of a new school in the Northwest.

But not if it leads to premature sprawl development on farmland.

Here are the reasons planning staff gave for refusing the request from Auburn (emphasis added):

You can read the full staff report here.

Back in May 2021, municipal council referred this matter to Civic Administration (the vote was 10-4, with Kayabaga, Helmer, Hopkins and Turner opposed and Salih absent) to allow for more discussions with the school board.

The proposal from Deputy Mayor Morgan as well as related letters and comments are available on the planning and environment committee agenda for 27 Sept 2021.